Mark Howe emerged from the shadow cast by his iconic father Gordie to achieve greatness. In this autobiography, he vividly describes his unparalleled experiences. A U.S. Olympic silver medalist at age 16, and a member of the Memorial Cup champion Toronto Marlboros, Howe went on to play seven seasons alongside his father, Gordie, and brother, Marty, for the WHA's two-time champion Houston Aeros and New England and Hartford Whalers before becoming a four-time NHL All-Star with the Philadelphia Flyers. Howe, elected to the Hockey Hall of Fame in 2011, recounts the joys and travails endured by the sport's most beloved family. Recollections of teammtes, injuries, game experiences, deaths, and his life as a child athlete make this a must-read for all hockey fans. 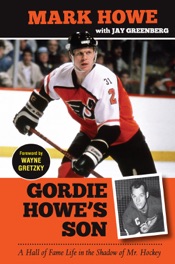