R is now the most widely used statistical software in academic science and it is rapidly expanding into other fields such as finance. R is almost limitlessly flexible and powerful, hence its appeal, but can be very difficult for the novice user. There are no easy pull-down menus, error messages are often cryptic and simple tasks like importing your data or exporting a graph can be difficult and frustrating. Introductory R is written for the novice user who knows a little about statistics but who hasn't yet got to grips with the ways of R. This new edition is completely revised and greatly expanded with new chapters on the basics of descriptive statistics and statistical testing, considerably more information on statistics and six new chapters on programming in R. Topics covered include A walkthrough of the basics of R's command line interface Data structures including vectors, matrices and data frames R functions and how to use them Expanding your analysis and plotting capacities with add-in R packages A set of simple rules to follow to make sure you import your data properly An introduction to the script editor and advice on workflow A detailed introduction to drawing publication-standard graphs in R How to understand the help files and how to deal with some of the most common errors that you might encounter Basic descriptive statistics The theory behind statistical testing and how to interpret the output of statistical tests Thorough coverage of the basics of data analysis in R with chapters on using chi-squared tests, t-tests, correlation analysis, regression, ANOVA and general linear models What the assumptions behind the analyses mean and how to test them using diagnostic plots Explanations of the summary tables produced for statistical analyses such as regression and ANOVA Writing functions in R Using table operations to manipulate matrices and data frames Using conditional statements and loops in R programmes Writing longer R programmes The techniques of statistical analysis in R are illustrated by a series of chapters where experimental and survey data are analysed. There is a strong emphasis on using real data from real scientific research, with all the problems and uncertainty that implies, rather than well-behaved made-up data that give ideal and easy to analyse results. 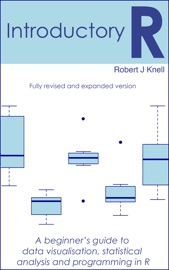