Originally published by Wm. Morrow in 1995, SKYGODS is the story of Pan American World Airways from its meteoric ascent to its plunge to extinction. Pan Am blazed the way across the world's oceans with its magnificent Clipper ships, launched the first international jet service, was the first to fly the behemoth 747, was the lead customer for America's SST and the Concorde, and was even taking reservations for the first commercial flights to the moon.
SKYGODS is the true story of an American legend. 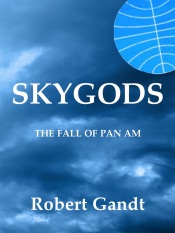