Believe is the profoundly moving story of Eric LeGrand, the former defensive tackle for the Rutgers University Scarlet Knights football team, who suffered a severe spinal cord injury and was left paralyzed by a crushing on-field tackle during a heated game with Army. A remarkable true account of a courageous young athlete whose unshakable faith, spirit, positive outlook, and rousing motto, “BELIEVE!” would serve as inspiration to legions of fans—and as motivation in his own quest to walk again—Eric’s story has received national attention, heavily covered by ESPN and Sports Illustrated. It will lift the hearts of every reader, not least of all those who were affected by quarterback Tim Tebow’s bestselling memoir, Through My Eyes. 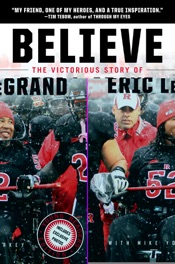