According to Wikipedia: "The Upanishads (Sanskrit: उपनिषद्, IAST: Upaniṣad, IPA: [upəniʂəd]) are philosophical texts considered to be an early source of Hindu religion. More than 200 are known, of which the first dozen or so, the oldest and most important, are variously referred to as the principal, main (mukhya) or old Upanishads. ... Swami Paramananda (1884–1940) was one of the early Indian teachers who came to the United States to spread the Vedanta philosophy and religion in America. He was a mystic, a poet and an innovator in spiritual community living. 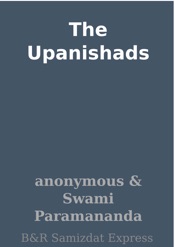