Renowned scholar Stephen Greenblatt brings the past to vivid life in what is at once a supreme work of scholarship, a literary page-turner, and a thrilling testament to the power of the written word.
In the winter of 1417, a short, genial, cannily alert man in his late thirties plucked a very old manuscript off a dusty shelf in a remote monastery, saw with excitement what he had discovered, and ordered that it be copied. He was Poggio Bracciolini, the greatest book hunter of the Renaissance. His discovery, Lucretius’ ancient poem On the Nature of Things, had been almost entirely lost to history for more than a thousand years.

It was a beautiful poem of the most dangerous ideas: that the universe functions without the aid of gods, that religious fear is damaging to human life, that pleasure and virtue are not opposites but intertwined, and that matter is made up of very small material particles in eternal motion, randomly colliding and swerving in new directions. Its return to circulation changed the course of history. The poem’s vision would shape the thought of Galileo and Freud, Darwin and Einstein, and—in the hands of Thomas Jefferson—leave its trace on the Declaration of Independence.

From the gardens of the ancient philosophers to the dark chambers of monastic scriptoria during the Middle Ages to the cynical, competitive court of a corrupt and dangerous pope, Greenblatt brings Poggio’s search and discovery to life in a way that deepens our understanding of the world we live in now. 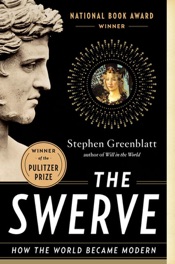