Ten-year-old Jonathan practically lives at the Anchorage Zoo, where his father is a keeper. He loves animals, and even imagines himself inside their bodies, seeing what they see, feeling what they feel.

Meanwhile, a young brown bear is wandering through the woods near Anchorage, alone and hungry. One night, while searching for food, the bear crosses paths with Jonathan, who eagerly follows him onto the zoo grounds.

But when the bear accidentally kills Mama Goose, Jonathan’s favorite zoo creature, the boy loses the empathy he had felt earlier. He wishes that the bear—now nicknamed Trouble—would meet the same fate as his beloved goose, and he impulsively takes steps to make sure that happens.

Based on an actual incident, and told in alternating chapters from the bear’s and Jonathan’s points of view, this is both an involving animal story and a thought-provoking investigation into the consequences of one’s actions. 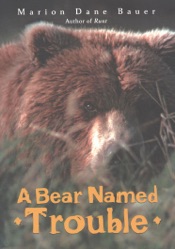