A sweeping history of tragic genius, cutting-edge science, and the Haber-Bosch discovery that changed billions of lives—including your own.

At the dawn of the twentieth century, humanity was facing global disaster: Mass starvation was about to become a reality. A call went out to the world’ s scientists to find a solution.

This is the story of the two men who found it: brilliant, self-important Fritz Haber and reclusive, alcoholic Carl Bosch. Together they discovered a way to make bread out of air, built city-sized factories, and saved millions of lives.

But their epochal triumph came at a price we are still paying. The Haber-Bosch process was also used to make the gunpowder and explosives that killed millions during the two world wars. Both men were vilified during their lives; both, disillusioned and disgraced, died tragically.

The Alchemy of Air is the extraordinary, previously untold story of a discovery that changed the way we grow food and the way we make war–and that promises to continue shaping our lives in fundamental and dramatic ways. 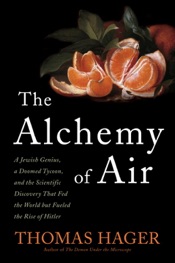