You're a Bad Man, Mr. Gum was selected as a Tom Fletcher Book Club 2017 title.

Shabba me whiskers! It’s that bestselling and award-winning first ever Mr Gum book by Andy Stanton. The Mr Gum books are only the craziest, funniest most best books for children in the whole wide world.

Good evening. Mr Gum is a complete horror who hates children, animals, fun and corn on the cob. This book’s all about him. And an angry fairy who lives in his bathtub. And Jake the dog, and a little girl called Polly and an evil, stinky butcher all covered in guts. And there’s heroes and sweets and adventures and EVERYTHING.

Perfect for fans of Roald Dahl and David Walliams.

Have you collected all the well brilliant Mr Gum series?

You're a Bad Man, Mr Gum

Mr Gum and the Biscuit Billionaire

Mr Gum and the Goblins

Mr Gum and the Power Crystals

Mr Gum and the Dancing Bear

Mr Gum and the Cherry Tree

Mr Gum and the Secret Hideout

‘Worryingly splendid’ – Guardian NOT FOR BORERS!

Andy Stanton studied English at Oxford but they kicked him out. Before becoming a children’s writer he was a film script reader, a market researcher, an NHS lackey, a part-time sparrow and a grape. Today he is best-known for the hilarious and much-loved Mr Gum books, which are published in 34 countries worldwide in over 30 languages. The series has won numerous awards, including the inaugural Roald Dahl Funny Prize, the Red House Children’s Book Award and two Blue Peter Book Awards.

'Smooky palooki! This book is well brilliant! Andy Stanton is far too clever and funny and should be locked away in a very dark place that nobody can find' – Jeremy Strong, bestselling author of The-Hundred-A-Mile-An-Hour Dog

'They're properly funny, those books' – India Knight, bestselling author of My Life on a Plate

'As always, Stanton has a ball with dialogue, detail and devilish plot twists' – Scotsman

Andy Stanton studied English at Oxford but they kicked him out. Before becoming a children’s writer he was a film script reader, a market researcher, an NHS lackey, a part-time sparrow and a grape. He is best known for the hilarious, bestselling and award-winning Mr Gum series and has also written picture books, including Danny McGee Drinks the Sea. Andy lives in North London and likes cartoons, books and music (even jazz).

David Tazzyman studied illustration at Manchester Metropolitan University. As well as illustrating the Mr Gum series, he has illustrated many picture books Eleanor's Eyebrows, You Can't Take an Elephant on the Bus, Michael Rosen's Jelly Boots, Smelly Boots and My Mum's Growing Down by Laura Dockrill. He lives in Leicester with his wife and three sons. 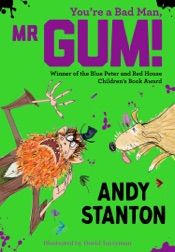