Is Rachel Robinson the only one on campus who doesn't know who Devin Freedman is?

No big deal except that the bad-boy rock star gets a kick out of Rachel's refusal to worship at his feet. And that seems to have provoked his undivided attention.

It's up to the librarian to find out firsthand just how "bad" he really is. Because her secret—and her growing feelings for a man who claims he's bent on redemption—depend on his turning out to be as good as he seems.

Which is really, really good.

"Romance readers have a noise we make when we mention a book that's tremendously good. It's somewhere between a gasp and a sigh…" ~ Smart Bitches, Trashy Books Best Romance 2010 list posted on Kirkus Reviews 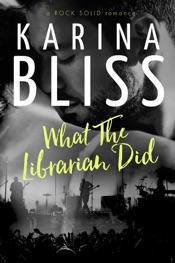