This unique collection of texts represents the theory and resulting experience of creating the first socialist state. Vladimir Lenin wrote The State and Revolution in the lead up to the launch of the socialist revolution. At this time, the question of governance claimed the Bolsheviks' special attention. Lenin wrote the piece in September 1917 while in hiding after the defeat of the July uprising. It was first published in May 1918 in Petrograd. According to Lenin, the working class or "vanguard of the proletariat" should play a decisive role in the revolution and the establishment of a new state. He discarded capitalist and social-democratic ideas about the supposed "neutrality" of the state and revealed it to be an instrument of class rule. John Reed, an American journalist, met with Lenin during this time and witnessed the rise of the Bolshevik dictatorship. <br /> He later wrote Ten Days That Shook the World, describing the 1917 October Revolution.<br /> 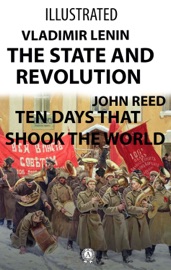