Days of Sorrow and Pain, winner of the 1979 Pulitzer Prize in Biography, tells the story of Germany’s Jews under the Nazis and of one man’s valiant efforts to help them meet the horrors of the Hitler regime. Leonard Baker explores the disintegration of German society, the plight of German Jews and the philosophy of Leo Baeck which enabled him to guide his people in their struggle for survival. After Hitler came to power, German Jews formed the Reichsvertretung with Leo Baeck at its head. As Berlin’s leading Rabbi and one of the foremost Jewish theologians in the world, Baeck was the rallying point for all Jewish factions. He dealt secretly with emissaries from abroad to arrange for Jews to emigrate and saw to it that Jewish children received a religious education. Young men were trained for the rabbinate in Berlin as late as 1942.

Leo Baeck chose to remain in Germany as long as there were still Jews there. He was arrested five times, once after writing a prayer to be read in all German synagogues reminding Jews that even “in this day of sorrow and pain,” they bowed only before God and never before man. After his last arrest in 1943 at the age of 69, Rabbi Baeck was sent to Theresienstadt where he hauled trash carts by day, and organized educational programs for his fellow inmates at night, consoling them, becoming one of their strengths.

After the war, having survived the Holocaust, Baeck never sought revenge, but worked for reconciliation between Germans and Jews. He became a world leader of liberal Judaism and never doubted the ultimate triumph of good over evil nor underestimated the responsibility of the individual to bring about that triumph.

“Only now, more than twenty years after Baeck’s death, has Leonard Baker, a writer on American political history, given us a full life story. Drawing on nearly a hundred interviews with persons who knew Baeck and supplementing these with a rich variety of printed and archival sources, he has succeeded in fashioning an intriguing portrait of the rabbi-scholar called upon to assume leadership in a time of crisis. The inherent drama of the subject together with Baker’s practiced writing skill has made for a book of broad popular interest. It has even been awarded the Pulitzer Prize for biography.” — Michael A. Meyer, American Jewish History

“There are several outstanding reasons why this book was awarded the Pulitzer Prize in biography. The evidence of extensive research and scholarship exists in one of the most complete oral and written bibliographies that is presently available on contemporary German Jewry. Baker’s writing style, journalistic at times, is free from conventional pedantry, but is satisfying enough for even the most stodgy academe. Furthermore, the historical flow of the text leaves little doubt that this is one serious author... Rabbi Baeck is shown as both the German as a Jew and the Jew as a German. Writing with an obvious appreciation for the role of the Jews in modern German history, Baker explains Baeck in the context of Reform Judaism...” — Michael W. Rubinoff, German Studies Review

“Baker tells Baeck’s story in relation to the history of the German Jews down to his death as an expatriate in England in the 1950s... Baker’s narrative is scholarly and simple in tone, as it should be; and although chiefly a study in Jewish history, it is also a study in historical tragedy and moral will...” — Kirkus Reviews 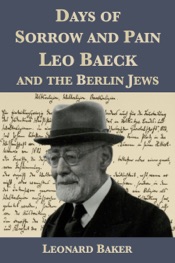