The Legend of Zelda: Link's Awakening is a 1993 action-adventure game developed and published by Nintendo for the Game Boy. It is the fourth installment in the Legend of Zelda series and the first for a handheld game console. Link's Awakening is one of the few Zelda games not to take place in the land of Hyrule, and does not feature Princess Zelda or the Triforce relic. Instead, protagonist Link begins the game stranded on Koholint Island, a place guarded by a whale-like deity called the Wind Fish. Assuming the role of Link, the player fights monsters and solves puzzles while searching for eight musical instruments that will awaken the sleeping Wind Fish and allow him to escape from the island. Development began as an effort to port the Super Nintendo Entertainment System game The Legend of Zelda: A Link to the Past to the Game Boy, developed after-hours by Nintendo staff. It grew into an original project under the direction of Takashi Tezuka, with a story and script created by Yoshiaki Koizumi and Kensuke Tanabe. The majority of the Link to the Past team reassembled for Link's Awakening, and Tezuka wanted the game world to feel like the television series Twin Peaks. After a development period of one and a half years, Link's Awakening was released in Japan in June 1993 and worldwide later in the year. Link's Awakening was critically and commercially successful. Critics praised the game's depth and number of features; complaints focused on its control scheme and monochrome graphics. An updated rerelease, The Legend of Zelda: Link's Awakening DX, was released for the Game Boy Color in 1998 featuring color graphics, compatibility with the Game Boy Printer, and an exclusive color-based dungeon. Together, the two versions of the game have sold more than six million units worldwide, and have appeared on multiple game publications' lists of the best video games of all time. A 3D remake was released for the Nintendo Switch in September 2019. 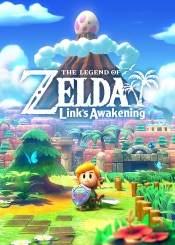