Transported to a world of swords and sorcery, Akira and his class found themselves endowed with heroic powers--but nothing was as it seemed. In a vicious betrayal, the king framed Akira for the murder of his own Knight Commander, Saran. Now Akira flees into the depths of a perilous labyrinth, following Saran's last order: to reach the bottom at any cost. Finding unexpected allies and enemies within those magical corridors, the Assassin sharpens his skills, waiting for the day he can take revenge! 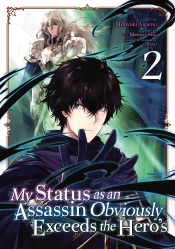