Reviews:
“To live now and not to know this work is to be a kind of historical fool missing a crucial part of the consciousness of the age.” (W.L. Webb, Guardian);
“The ferocious testimony of a man of genius.” (Stephen Spender, London Magazine);
“What gives the book its value is the sound it gives out; the harsh roar give out by a wise and experienced animal as a warning that the herd is in danger.” (Rebecca West, Sunday Telegraph);
“He is one of the towering figures of the age as a writer, as moralist, as hero... in The Gulag Archipelago he has acheived the impossible.” (Edward Crankshaw, Observer);
“It is impossible to name a book that had a greater effect on the political and moral consciousness of the late twentieth century.” (David Remnick, New Yorker).

About the Author: Aleksander Solzhenitsyn was born in Kislovodsk, Russia, in 1918. He was brought up in Rostov, where he graduated in mathematics and physics in 1941. After distinguished service with the Red Army in the Second World War, he was imprisoned from 1945 to 1953 for making unfavourable remarks about Joseph Stalin. He was rehabilitated in 1956, but in 1969 he was expelled from the Soviet Writers’ Union for denouncing official censorship of his work. He was forcibly exiled from the Soviet Union in 1974 and deported to West Germany. Later he settled in America, but after Soviet officials finally dropped charges against him in 1991, he returned to his homeland in 1994 and died in August 2008, aged eighty-nine. Solzhenitsyn wrote many books, of which One Day in the Life of Ivan Denisovich, Cancer Ward and The Gulag Archipelago are his best known. 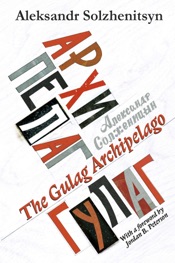