Here’s what you can look forward to in September’s issue:

Inside The Studio
What have the Design Studio’s hobbyists been up to this month?

WARHAMMER 40,000
Echoes From The Warp
Robin’s donned his rose-tinted glasses to look back at his own hobby journey.

Pain Aeterna
In this short story, judgement is passed on Battle-brother Apharan, Primaris Marine of the Dark Angels...

Index Astartes: Dark Angels
How will the creation of the Primaris Marines affect the most secretive of Space Marine Chapters? Find out in Index Astartes. Plus, a new mission for the Unforgiven!

Galactic War Zones: Frozen Wastelands
Dig out your mittens for an ice-worlds modelling and painting guide. Just remember to take them off before you start painting...

WARHAMMER AGE OF SIGMAR
Rules of Engagement
Jervis chats about small-footprint games and how Meeting Engagements and the Open War army generator will revolutionise your games.

A Tale of Four Warlords: The Stormvault Warlords
Matt, Alex, Steve, and Ben join us once again to show off what they've been painting, notably big stuff and terrain!

A Slayer Reforged
There’s a new model of Gotrek out, as well as a new audio drama and novel! We chat to Brian Nelson and Anja Wettergren about the new model, David Guymer and Darius Hinks about Gotrek’s new adventures, and Johan Grenier about illustrating Gotrek.

When Six Tribes Go To War
Miniatures designer Maxime Pastourel joins us to talk about the design of the new Warcry miniatures and the undeniable lure of the path to Chaos.

Arena of Blood
Sharpen your blades, because there’s a new campaign event for Warcry. Can you possibly guess what it involves?

WARHAMMER UNDERWORLDS
Glory Points
Phil Kelly has chats about the Shadeglass Shivs, the Nighthaunt warband he used to win the studio Underworlds tournament.

WARHAMMER QUEST: BLACKSTONE FORTRESS
The Broggan Brothers
What would happen if you set a pair of Ogryn brothers loose in the Blackstone Fortress? Find out, and try adding them to your retinue, with these new rules.

MIDDLE-EARTH™ STRATEGY BATTLE GAME
Tactica: Heroic Actions
A handy guide to help you make the most of using Heroic Actions in the Middle-earth Strategy Battle Game.

UPCOMING DLC FOR TOTAL WAR: WARHAMMER!
Physical copies of White Dwarf include a card with a free code to unlock Gotrek Gurnisson and Felix Jaeger in Total War: Warhammer II, though the digital edition doesn't include this code. 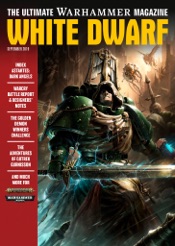