Cancer research has reached a major turning point. The quality and quantity of information gathered about this disease in the past twenty years has revolutionized our understanding of its origins and behavior. No one is better qualified to comment on these dramatic leaps forward than molecular biologist Robert A. Weinberg, director of one of the leading cancer research centers in the world. In One Renegade Cell , Weinberg presents an accessible and state-of-the-art account of how the disease begins and how, one day, it will be cured. Weinberg tells how the roots of cancer were uncovered in 1909 and when the first cancer-causing virus was discovered. He then moves forward to the discovery of the role of chemical carcinogens and radiation in triggering cancer, and relates the remarkable story of the discoveries of oncogenes and tumor suppressor genes, the master controllers of normal and malignant cell proliferation. This book, which presumes little prior knowledge of biology, describes the revolution in biomedical research that has finally uncovered the forces driving malignant growth. Drawing on insights that simply were not available until recently, the discoveries presented in One Renegade Cell have already begun to profoundly alter the way that we diagnose and treat human cancers. 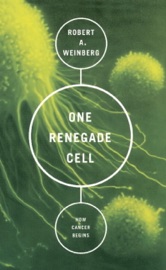