Adam Milan washes up on the coast of Bali after being forced off a yacht at gunpoint by a psychotic captain. He is taken in by Anak, a Balinese hotel owner and healer. During his recuperation Adam is reported drowned by the media and he sees this as an opportunity for a fresh start in life. Assuming a new identity, Adam takes a job at Anak’s hotel and gradually rebuilds his life while experiencing all that the Island of the Gods has to offer. Things take a sinister turn, however, when he becomes entangled in a world of drug dealers, and when a friend is arrested with ten kilos of cocaine Adam is forced to help him escape from Bali’s notorious Kerobokan prison, or ‘Hotel K’. Shaman of Bali offers a riveting insight into a world of drug smuggling, cockfighting, bribery and imprisonment, flavoured with shamanic rituals and Balinese mysticism. Based on the experiences of the author, this powerful crime thriller does for Bali what Shantaram did for Bombay. 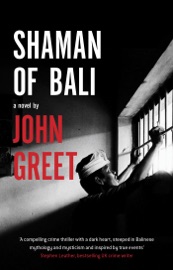