Indian clubs are a type of exercise equipment designed for developing the strength of the user through rhythmic movements and swinging. They became extremely popular during the Victorian era, and were even used as the basis for gymnastics events during the 1904 and 1932 Olympics. This vintage book contains a detailed guide to using Indian clubs, complete with explanatory figures and positions. “The Indian Club Exercise” will be of utility to those with an interest in Indian clubs and calisthenics, and would make for a fantastic addition to collections of related literature. Contents include: “Introduction”, “General Remarks on Physical Culture”, “Introduction to the Exercises”, “The Alphabet of the Club Exercise”, “The Exercises, with Illustrated Figures”, “Exercises for Ladies and Concluding Remarks”. Many vintage books such as this are becoming increasingly rare and expensive. We are republishing this volume now in an affordable, modern, high-quality edition complete with a specially commissioned new introduction on Indian clubs. 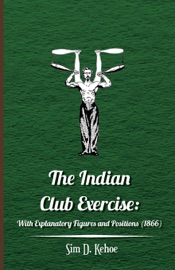